Since my last post, I have been sewing up a storm and knitting a bit, too. Unfortunately, I've had very little time to devote to photographing my projects (aside from some hurried snapshots on Instagram here and there), so you'll have to wait for the eye candy. To give you an idea of what I've been up to: I made some crazy pants and knit some crazy socks, sewed a few summer basics for Anya, knit a hat I won't need for months, started more socks that are rather boring me to tears, printed out a stack of pattern PDFs from Seamwork Magazine to make someday (I'm a subscriber!) and bought a jeans pattern (a couple, actually - this one and this one and this one and I also really want to try this one but I think some self-restraint is in order) that I do not yet have the gumption or brain space to start. But I will very soon, I think, perhaps as a reward to myself for turning in grades next week (just in time for hot summer weather, ha!)

In the meantime, I've had a lot of thoughts about sewing clothes, specifically for kids, and I wanted to write some of those thoughts down here. I have such mixed results when I sew clothes, and thus, I have a lot of mixed feelings about doing it in the first place. Once you throw in opinions and social pressures of the young people in your family, the whole picture gets a lot more complicated. 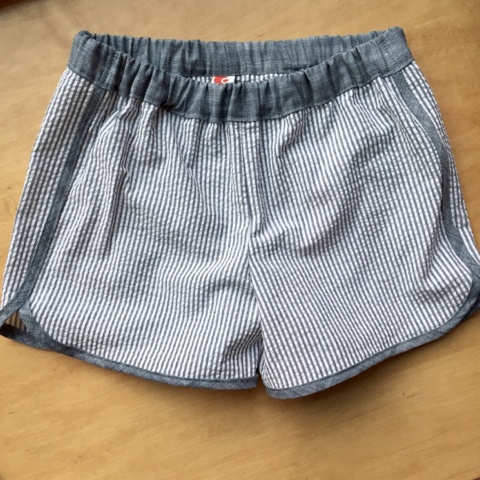 Let's back up for a minute. Those of us who sew garments for ourselves do so for a variety of reasons: it's fulfilling to make things, it feels good to make an article of clothing that looks and fits just the way you want, you can at least partially avoid taking part in the unethical practices of the fashion/textile industry. I fully admit to having jumped on this bandwagon for many of the same reasons.

I have found, though, that it's all too easy to get swept up in the romantic ideas of a handmade wardrobe, only to be disappointed when something I've spent time, money and effort making doesn't turn out right. I'm slowly getting better at choosing fabric and refining my technique, but I've had several things end up with a goofy fit or sloppy finish or odd buttonhole that I'll only wear as PJs or for garden work. I know that to get better, I have to keep practicing, or possibly even break down and seek outside help (like from a class, gasp). I'm too proud for that.

As frustrating as it can be to botch a project, it's pretty damn rewarding to have a successful garment. It's why I keep doing it. I wear those crazy pants with pride! I know you can't wait to see them in detail.


Back to sewing for kids...I have a 10-year-old son and an 8-year-old daughter. A lot of kids' patterns only go up to size 6 or 8. A few go up to size 10 or 12, and it's rare to see any that go beyond. I used to wonder why, but now I understand. I made a couple things for Daniel recently and I have noticed that he rarely wears them. And by rarely I mean never. This morning he tried on a pair of shorts I made him and commented that he might wear them on the weekend, but not to school. This does not really hurt my feelings. After all, most 10yo kids do not want to wear something made by their mom, boys especially.

It's different with Anya. She's still young enough - just - that there's not the stigma of wearing something handmade. I also think girls have more leeway in some respects when it comes to clothing choices. This can be both good and bad, of course, but it means that she won't stick out if she goes to school in a pair of handmade city gym shorts. 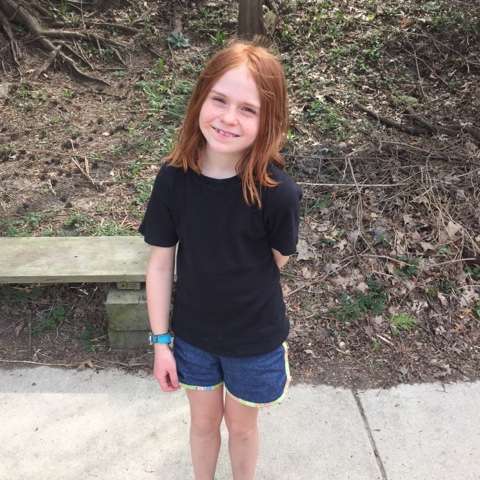 This evening I decided to make a plain black t-shirt for Daniel using my serger. I've had that serger since I saved up and bought it cheap at Joanns in 2002 or 2003, but until tonight I had only ever used it to finish seams, never to stitch together knit fabric. The t-shirt was an experiment to see if I could sew knits on that machine and I made a black one because black thread was in the machine and damned if I was going to re-thread it (fancy pants sergers thread themselves and I want one, but $$$$ so it's not happening). I used my tried-and-true Flashback Skinny Tee pattern (that one goes to size 14!) and some plain black interlock knit. The thing about sewing with a serger is that the seam is pretty much permanent so there is no chance to fix mistakes. 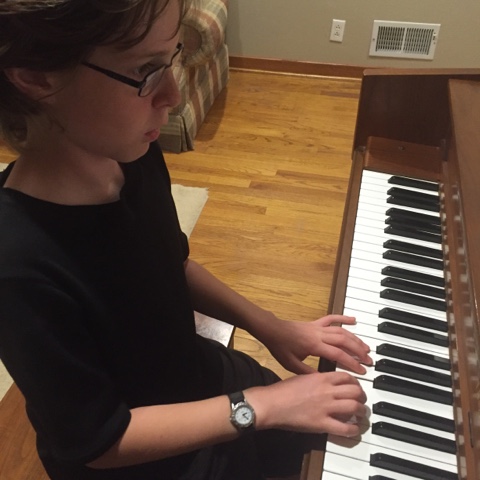 Since the whole thing is jet black I didn't bother with any close up pictures. Nothing will show up anyway.

Miraculously, I did not screw anything up and the shirt turned out okay. Daniel tried it on and says he likes it. He even wore it to bed, bless his heart. But I dunno...something about it just isn't quite as perfect as it could be. The fit of the sleeves (a tad tight?), the size of the neck (a tad loose?) that would be fine on a younger kid, but not so much on him.

My whole point here is that I'm still undecided on whether it's even worth sewing for kids or not. They grow out of sizes in a flash, they don't always like or agree to wear what you've made (often for legitimate reasons, in my case!), and it just seems like a whole lot of effort and not much reward. It certainly doesn't save any money, especially when half the things I make are duds.

Do you sew for kids? What do you think? 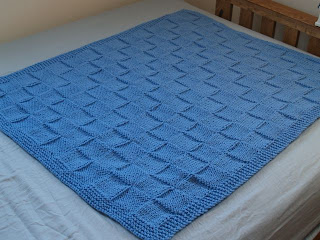 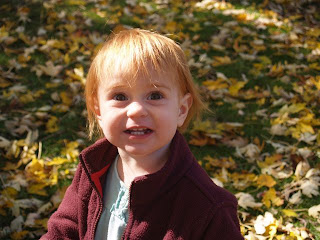 Suze
I have a doctorate in collaborative piano, a husband, two kids, and no idea what I want to do when I grow up.